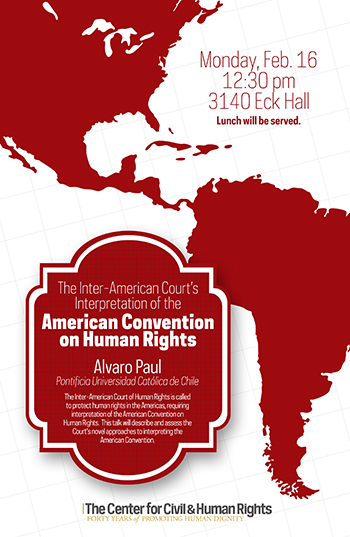 Álvaro Paúl is a Professor at Pontificia Universidad Católica de Chile. He obtained his Law J.D. degree atUniversidad de los Andes (Chile, 2003), his Master’s degree (Magister Juris) at University of Oxford (2009), and his PhD at Trinity College Dublin (2013). His PhD thesis dealt with evidence before the Inter-American Court of Human Rights. Álvaro Paúl was admitted to the Chilean Bar in 2004. He has been a study visitor at the European Court of Human Rights (Strasbourg, 2013), an intern at the Inter-American Commission on Human Rights (Washington D.C., 2012), and a professional visitor (intern) at the Inter-American Court of Human Rights (San José de Costa Rica, 2010). He has previously worked in Chile as: a researcher, a parliamentary assistant, and an attorney. Among other distinctions, Álvaro Paúl has been awarded scholarships from both the British Council and the Chilean Government. His undergraduate’s thesis was honoured with the Fundación Fueyo Laneri award for being one of the four best degree theses of year 2003, and published as a book by Lexis Nexis (hardcopy format). He has also published several articles in both English and Spanish.