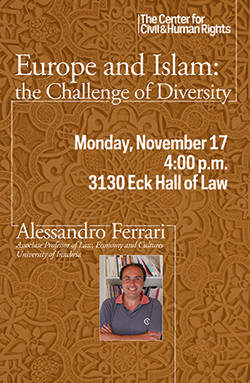 The presence of Islam is perceived today as one of the novelties of the contemporary European scene. This presence challenges an alleged European universality and highlights the tendency of the societal and legal structures of the “Old continent” to reify and essentialize cultural and religious experiences which appear distant from European traditional ones. In particular, Muslim presence is used by nation-states to reactivate particularistic narratives against the “universalistic” European Union, framework revealing the existence of a strong dialectic between particularism and universalism within each main institutional actor: nation-states, traditional churches and Muslims themselves.

Alessandro Ferrari, L.L.B. University 0f Modena (1993), Ph.D. Law and Religion University of Milano (1999), Ph.D. Canon Law (University of Paris XI (2003) is confirmed Associated Professor at the Department of Law, Economy and Cultures of the University of Insubria (Varese and Como) and permanent visiting professor at the Research Master “Islamologie, Droit et gestion” at the University of Strasbourg. He is scientific director of the Research Center “Religion, Law and Economy in Mediterranean Area” (REDESM) at the University of Insubria where he teaches Law and Religion, Comparative Religious Laws and Mediterranean Islam.  His most recent research interests and publications focus on the difference between secularism and laïcité; religious freedom in Europe and constitutional transitions of the MENA countries. His last books are Libertà religiosa in Italia. Un percorso incompiuto, Carocci, Roma 2012 and The burqa affair across Europe (ed. with Sabrina Pastorelli), Ashgate, Farnham 2013.