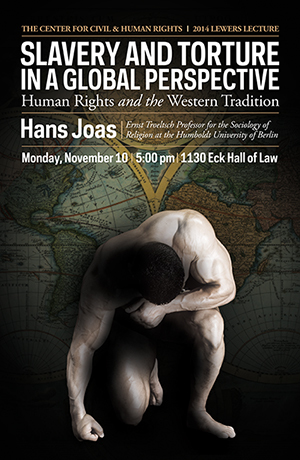 The 2014 Lewers Lecture was presented by Hans Joas, Ernst Troeltsch Professor for the Sociology of Religion at the Humboldt University of Berlin in Germany and Professor of Sociology and a Member of the Committee on Social Thought at the University of Chicago. He was the Director of the Max Weber Center for Advanced Cultural and Social Studies at the University of Erfurt from 2002-2011, and served as the Vice-President of the International Sociological Association from 2006-2010. His publications include “The Genesis of Values” (University of Chicago, 2000), “The Sacredness of the Person: A New Genealogy of Human Rights” (Georgetown University, 2013), "War in Social Thought. Hobbes to the Present", with W.Knoebl (Princeton University Press 2013), "Faith as an Option. Possible Futures for Christianity" (Stanford University Press 2014).

The abolition of torture in Europe in the eighteenth century and the abolition of slavery in the United States in the nineteenth century are considered to be among the most important chapters in the history of human rights. They are often mentioned as indicators of a cultural superiority of the West or of the Judeo-Christian or Enlightenment traditions. In this year’s Lewer Lecture, Mr. Joas challenged these traditional cultural explanations, as well as secular-humanist theories, about the origins of the idea of universal human rights. He argued that religious explanations that rely on deeply rooted philosophies of compassion do not explain why the ideas of universal human rights caught on when they did. Furthermore, he argued that many religions have perpetrated human rights violations throughout their histories. Secular humanist theories are also empirically untenable.

Instead, Mr. Joas offers an historical explanation of the emergence of the idea of human rights as a result of a process of sacralization of human beings. According to Mr. Joas, “a cultural transformation in this sense takes place when new values become subjectively self-evident and affectually intense;” that is, when members of a society feel an emotional impulse to intervene in violations of values considered self-evident because of personal experience. He argued that this process began in the Axial Age, when the first ideas about the existence of a universal morality emerged independently not only in the Western Tradition, but also in India and China. Ideas of universal morality have existed in all of these post-axial traditions, but Mr. Joas said that none of them should claim a monopoly of responsibility for the idea of human rights because all major religions and philosophical traditions have violated human rights since the Axial Age.

“The fragility and the contingency of the processes that might we might call sacralization of the person remind us of the fact that the results of these processes must not symbolize a cultural triumphalism that makes human rights appear like a firmly established procession, one that demonstrates the superiority of one’s own culture.”

The Lewers Lecture is given in honor of Fr. William Lewers, C.S.C., who passed in 1997 at Holy Cross House. Fr. Lewers was a member of the Notre Dame board of trustees in addition to being director of The Center for Civil & Human Rights from 1985 to 1997.