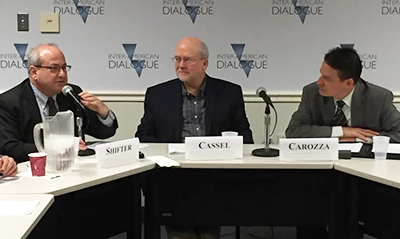 Two Notre Dame faculty experts -- Paolo Carozza and Doug Cassel -- offered big-picture reflections and pointed recommendations regarding the Inter-American human rights system at a packed event hosted by the Inter-American Dialogue in Washington, D.C on Wednesday, November 5. The audience included members of the Washington diplomatic corps and representatives of government ministries, academia, and NGOs from across the hemisphere.

The forum focused on issues that emerged from a high-level retreat held at Notre Dame in March 2014, including ways to improve the transparency in selecting the most qualified candidates for Judge and and Commissioner in the Inter-American system. This issue is of urgent importance given the upcoming elections for four members of the Commission and two members of the Court in 2015.  Read more about Notre Dame's ongoing impact on the Inter-American system here.

On November 13 Leonel Fernandez, former President of the Dominican Republic, made remarks to the Organization of American States that included references to the November 5 Notre Dame event. Read more about the ensuing dialogue here.