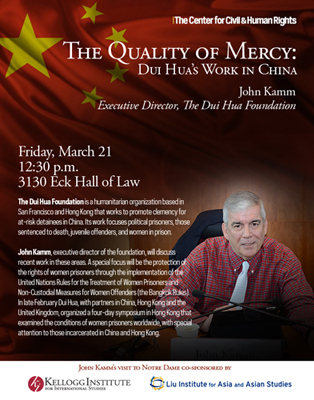 The Center for Civil and Human Rights had the unique privilege of hosting John Kamm, executive director of the Dui Hua Foundation, for a public lecture given Friday, March 21st, 2014 in the Eck Hall of Law at the University of Notre Dame. In his talk, “The Quality of Mercy: Dui Hua’s Work in China”, Mr Kamm described the ongoing human rights work of Dui Hua Foundation—a transnational NGO based in San Francisco—advocating for rights of imprisoned Chinese citizens, especially political dissidents.

Mr Kamm, a retired American businessman who spent much of his professional life in Beijing, offered the 70+ undergraduates, graduate students, and faculty in attendance valuable advice from his 20+ of experience advocating for prisoner rights in China. He described Dui Hua’s operations in China, including the uncovering and keeping records of incidents of incarcerations, filing inquiries about individual prisoners to the Chinese government, advocating for better treatment and equal clemency for incarcerated citizens, attending Chinese judicial proceedings and consulting with Chinese governmental officials on the reform of their juvenile system. In particular, Mr. Kamm described Dui Hua’s latest initiative to study the steep increase in the percentage of youth and female prisoners in China. The issue is particularly pressing in a country where 25% of all marriages suffer from domestic violence, accounting for 1 in every 10 homicides. Dui Hua’s initial investigations resulted in its inaugural International Symposium on Women in Prisons, held in Taiwan in February of 2014.

After his presentation, Mr. Kamm fielded questions from students and faculty concerning the ramifications of Kamm’s work on the landscape of human rights in China, Dui Hua’s work in context of other human rights organizations, and the application of Dui Hua’s advocacy model to other regions of interest in the world. The public lecture served as the capstone to a three-day visit, Mr. Kamm’s third to the University of Notre Dame, sponsored by the CCHR, with generous support from the Kellogg Institute for International Studies, and Liu Institute for Asia and Asian Studies.