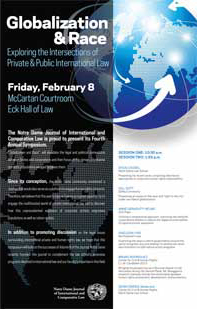 The Notre Dame Journal of International and Comparative Law is proud to present its Fourth Annual Symposium.

“Globalization and Race” will elucidate the legal and political connections between States and corporations and then focus on the remarkably diverse domestic populations wedged between them.

Since its conception, the Notre Dame community envisioned a Journal that would also serve as a platform to engage human rights concerns. Therefore, we believe that this year’s topic will serve as a great opportunity to engage the multifaceted world of private international law and to discover how this unprecedented explosion of corporate activity engrosses populations as well as nation-states.

In addition to promoting discussion on the legal issues surrounding international private and human rights law, we hope that this symposium will build on the successes of Volume III of the Journal. Notre Dame recently founded this journal to complement the law school’s extensive programs devoted to international law and our faculty’s expertise in this field.

Co-sponsored by the Center for Civil and Human Rights.

GILL GOTT
DePaul University
Presenting an essay on the race and “right to the city” under neo-liberal globalization.

SHELDON LYKE
Northwestern Law
Examining the ways in which governments around the world recognize race and attempt to ameliorate racial discrimination via affirmative action programs.

BRUNO RODRIGUEZ
Center for Civil & Human Rights
L.L.M. Candidate 2013
Bringing his perspective as a Peruvian lawyer to the discussion during the Second Panel, Mr. Revaggino’s research interests include the relationship between human rights and poverty, development, and economics.