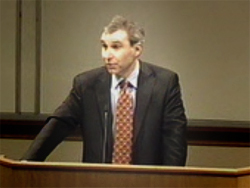 Steven R. Ratner,  Bruno Simma Collegiate Professor of Law at the University of Michigan Law School, suggests that international law plays a critical role in understanding the prospects for global justice. According to Mr. Ratner, the core rules of international law have their own morality and represent a real-world incarnation of a vision of global justice. That ethical vision is one that Mr. Ratner terms “thin” justice. While not the limit of justice for which we should strive, it is justice deserving of the name and consistent with a cosmopolitan vision of the world. After explaining his notion of thin justice, Mr. Ratner presented self-determination as an example of a core international law that meets the standard of thin justice.

Steven R. Ratner is the Bruno Simma Collegiate Professor of Law at the University of Michigan Law School. His teaching and research focus on public international law and on a range of challenges facing governments and international institutions since the Cold War, including ethnic conflict, border disputes, counter-terrorism strategies, corporate and state duties regarding foreign investment, and accountability for human rights violations. Prof. Ratner has written and lectured extensively on the law of war, and is also interested in the intersection of international law and moral philosophy and other theoretical issues. Since 2009, he has served on the State Department’s Advisory Committee on International Law. Prof. Ratner holds a JD from Yale, an MA (diplôme) from the Institut Universitaire de Hautes Etudes Internationales (Geneva), and an AB from Princeton.

Video of Prof. Ratner’s talk can be seen here.

Co-sponsored by the University of Notre Dame’s Kellogg Institute for International Studies and the Center for Civil and Human Rights.