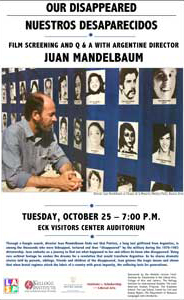 Juan Mandelbaum, an Argentine documentary producer/director, will show his prize-winning film “Nuestros Desaparecidos” (“Our Disappeared”) in the Eck Center Auditorium. Mandelbaum’s documentary (in Spanish with subtitles in English) chronicles his personal search for friends and loved ones who were “disappeared” in his native Argentina during the 1976-1983 military dictatorship. Through dramatic stories told by parents, siblings, friends and children of the disappeared, Mandelbaum shows that when brutal regimes rule a country with great impunity they cause enormous suffering that lasts for generations. Using rare archival footage, Mandelbaum brings the energy and tension of the time and place to life.

Co-sponsored by the Kellogg Institute for International Studies, the Institute for Scholarship in the Liberal Arts, the Graduate School and the Department of Romance Languages and Literatures.