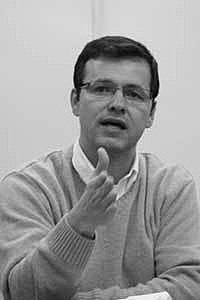 Abilio Peña is an important human rights defender and leader of the ecumenical Comision Interreclesial de Justicia y Paz (Inter-Church Justice and Peace Commission). The Inter-Church Justice and Peace Commission works in the Chocó department of Colombia to denounce the illegal acquisition of traditionally collective Afro-Colombian land by paramilitary groups. Mr. Peña has extensive knowledge of the situation in Colombia, potential effects of the pending US-Colombia Free Trade Agreement in his region, the increase in violence, and threats towards human rights workers and communities who speak out against impunity. Mr. Peña, a lay theologian, is a skilled public speaker who clearly and proficiently draws audiences into the reality of Colombia through his personal stories and experiences.

Mr. Peña’s visit is coming only months after he received death threats from the paramilitary group Aguilas Negras.