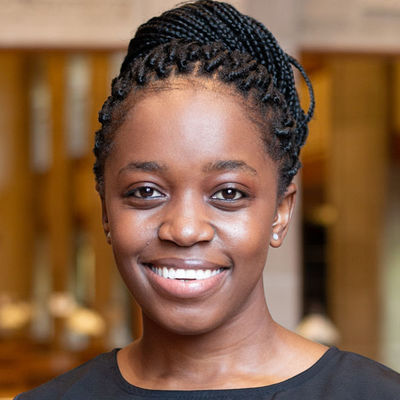 Simphiwe is a student in the LL.M. Program in International Human Rights Law. She obtained her law degree from the University of KwaZulu-Natal in 2015. Since graduation, she worked at the South African Human Rights Commission as a compliance officer in the right of access to information unit. In 2017, she clerked at the Supreme Court of Appeal, South Africa for all the Justices of the Court. In March 2018, Sidu joined the International Commission of Jurists where she was responsible for the promotion and protection of civic space and human rights defenders in Southern Africa, and coordinated the incubation and establishment of the Southern Africa Human Rights Defenders Network (SAHRDN) as a functioning network for security and protection of HRDs in Southern Africa. She has successfully coordinated fact finding and trial observation missions and collaborated with human rights defenders to push back on “weaponization” of the law in Southern Africa.

“This generation is asking tougher questions about reconciliation and justice in South Africa, and I am inspired by how it remains resolute in its vision of an intersectional and all-inclusive society."

How did you first become interested in civil or human rights?

When I was studying for my LL.B. degree at the University of KwaZulu-Natal, I became more conscious of how inequality continues to remain rife for many black South Africans. One particularly tragic story, a continuous reminder of why I am using the law as a tool to fight for social justice, is that of Michael Komape. Michael was a 5 year old boy who drowned in the most humiliating way – in a pit toilet at his school. He is among the generation of many young black South Africans whose dreams were promised to be realized when South Africa transitioned into a democracy. However, the structural and systemic inequalities that still exist are among the many reasons the dream of an equal South Africa for all has not yet been fully achieved.

From what or whom have you drawn inspiration?

I draw my inspiration from the caliber of young South Africans who are commonly referred to as the “born frees” — those who are considered too young to experience the apartheid oppressive rule at firsthand before South Africa officially attained democracy. I am inspired by how the young generation is carrying the baton and challenging the narrative of how a truly equal and united South Africa should look. This generation is asking tougher questions about reconciliation and justice in South Africa, and I am inspired by how it remains resolute in its vision of an intersectional and all-inclusive society.

I am very passionate about social justice and I want to continue to fight for the protection and promotion of all human rights in not only South Africa, but Africa as a whole. I am currently working as the Coordinator of the Southern Africa Human Rights Defenders Network, and our objective, amongst other things, is to protect civic space in the Southern African sub-region. My work therefore consists of protecting civil and political rights as well as socio-economic rights, and understanding the interdependency that exists in realizing both rights.

I am working beyond the borders of South Africa, and this has given me an opportunity to be exposed to the different political and social underpinnings that are greatly entrenched in Africa. Some states are more repressive than others and this places human rights defenders (HRDs) working in such environments at greater risk. This poses a great challenge, and offers a lesson in what best strategies should be adopted when seeking to protect and stand in solidarity with HRDs at risk. It requires us to ensure that our assistance will not be doing any harm and putting the HRD concerned at greater risk.

What paths forward do you see as the most promising? What questions do you feel are the most important to answer in order to find a path forward?

It is important to ensure that in our fight for human rights, no one gets left behind. I think it is vital to always question ourselves as to whether we are being diverse and inclusive in our approach to fight for equality and social justice. In addition, drawing lessons from the past, from how those who came before us fought against oppression, can be instrumental in ensuring that our future is one of great prosperity, peace and harmony.