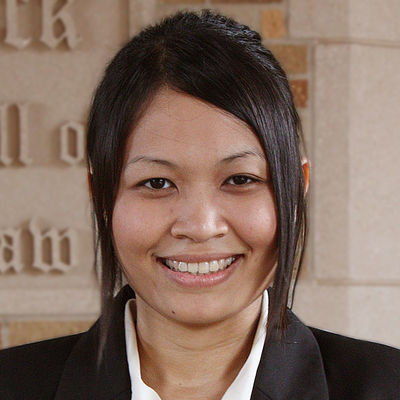 Nwe Nwe Lwin obtained her LL.B. from City University of Hong Kong School of Law in 2013 with a semester exchange study at Monash University, Australia. She worked as a legal consultant and a co-trainer specializing in participatory law making and human rights with non-governmental organizations in Burma, and led migrant education and protection projects at Suwannimit Foundation near the Thailand-Burma border. She also undertook an academic research project examining the implementation gaps of existing labor law and the structures impacting Burmese agricultural migrant workers in Thailand. Ms. Lwin is the recipient of a scholarship from the prestigious 2015-2016 Fulbright Foreign Student Program.

“As I believed in what Nelson Mandela said, ‘Education is the most powerful weapon which you can use to change the world,’ I struggled to gain access to a professional legal education abroad.”

Since childhood I have witnessed and personally encountered various social and political injustices in my country, Burma. Under numerous government repressions in Burma, the lives of many people have been torn apart by human rights violations including extrajudicial killings, torture, forced labor, sexual violence, racial and religious discrimination, arbitrary arrest, property confiscation and forced eviction, and denial of social and economic rights. Such injustices drew my attention, in my teenage years, to seek the meaning of justice and reconstruct the torn-apart lives. As I believed in what Nelson Mandela said, ‘Education is the most powerful weapon which you can use to change the world,’ I struggled to gain access to a professional legal education abroad - despite the fact that I was one of the many teenagers who had been denied educational opportunities because I grew up in Thailand-Burma border, the daughter of a political activist in exile. In 2009, I received a scholarship from Open Society Foundation to study law at City University of Hong Kong. There, courses such as Constitutional and Administrative Law, Human Rights and Civil Liberties, and Corporate Social Responsibility ignited my intellectual curiosity and encouraged me to dive into human rights law.

The experience of injustice in my own community has led me to realize my dream of becoming a human rights legal researcher, foreign lawyer, and community legal educator. Before I went to law school, I was working for Burma’s major opposition party, the National League for Democracy (Liberated Area) as a youth member. I was inspired by the charisma and courage of our party leader, Daw Aung San Suu Kyi (who was under house arrest at that time), other prisoners of conscience, and my father’s colleagues from the party. During law school, constitutional law professor Yash Ghai, and the writings of other prominent legal scholars, provoked my thoughts and inspired me in terms of constitutional change, which is a very important agenda for my country. Moreover, during my part-time job at the Asian Human Rights Commission in Hong Kong, I attended meetings with high-profile human rights activists who inspired me as I listened to their stories and heard of their commitments.

Due to the situation in my country, corporate abuses, constitutional change and guarantee of fundamental rights and freedoms are important to me. Furthermore, I am also interested in reconstructing the justice system through legal scholarship. The country’s judicial system is corrupt and the law schools cannot provide standard legal education to produce professionals who contribute to the rule of law and fair administration of justice. Basically, our community lacks a proper legal research institution that can propose the means to reform the judiciary and rebuild the justice system, or produce competent legal professionals.

Two of the greatest obstacles are personal security and practices stemming from structural injustice. Under the total military rule before 2011, my parents’ involvements with the opposition parties and democracy movement put me in danger while carrying out my work. Although the quasi-civilian government took office in 2011 and relaxed some restrictions against those who are working for human rights and democracy, I still encountered threats from military personnel when I travelled to the ethnic states and remote areas to provide legal training.

CCHR’s LL.M. Program in International Human Rights Law is one of the very few programs which give students the opportunity to become a different kind of lawyer – a lawyer for humanity. That is the reason I listed Notre Dame as a preference in my Fulbright application. The experience so far has exceeded my expectations. Classes are not only specifically focused on what we need to learn as a human rights lawyer, but also give thoughtful insights that will be applicable to what we want to do after graduation.

The fact that an LL.M. education from Notre Dame provides me with different insights and deeper concepts regarding international human rights law theory and practice will make me more competent, and allow me to advance my profession.