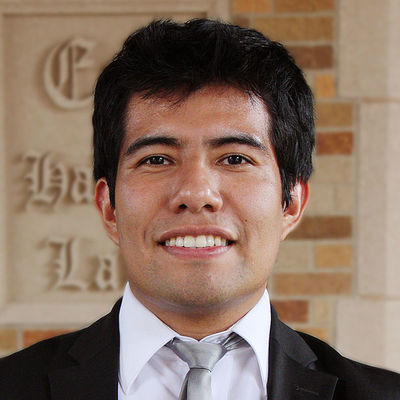 Mr. Rosas earned his law degree from the Centro de Investigacion y Docencia Economicas A.C. (CIDE) in 2013. From 2009 to 2012 he worked on strategic human rights litigation at the law school's public litigation clinic, and was selected to intern at the Supreme Court of Mexico in 2012. That same year, along with other colleagues, he founded “Semillas de Justicia,” an NGO focused on strategic human rights litigation. He served as a research assistant at the O’Neill Institute for National and Global Health Law at Georgetown University during 2013. In 2014 he served as a staff attorney at the Federal Commission of Antitrust Law in Mexico leading research against economic cartels. In 2015, he worked as an intern at the Inter-American Commission on Human Rights. Mr. Rosas is a 2015-16 Rita Bahr Scholar.

“I know how it feels to be abused by authority, to be governed by corrupt politicians, to scream when no one hears. I was concerned about it, so became a lawyer who practices human rights.”

I grew up in Oaxaca, one of the poorest states of Mexico. Many indigenous people in this state have low income and little access to health care and education. My mother belonged to one of these groups and I saw firsthand her difficulties with racial and social discrimination. I know how it feels to be abused by authority, to be governed by corrupt politicians, to scream when no one hears. I was concerned about it, so I became a lawyer who practices human rights.

The morning of September 16, 2006, my sister called and advised me not to go outside my home because the government was attacking teachers and civilians. I turned on the radio and there was news about a violent encounter between police forces and teachers. After ten minutes the radio signal was gone, and there was no news reporting the violent attack.

I went outside and saw blood and shoes on the street, and hundreds of policemen (some of them with dogs) persecuting civilians, but the news said nothing about it. After some hours teachers and civilians went back to the street and the police forces retreated. Many Oaxacans defended their own people. As a response to this attack, in 2006 teachers and the unprivileged from Oaxaca started a movement against the government; people were tired of corruption, discrimination, poverty, and lack of opportunities. They instituted the Popular Assembly of the People of Oaxaca (APPO).

My mother and I participated in political and activist activities defending the Popular Assembly of the People of Oaxaca. My mother is an indigenous woman who believes in building a better world, and so do I. My mother and these related events were my inspiration to become a human rights lawyer.

I feel most determined to address impunity and corruption in Mexico through litigation and activism. The Mexican people are abused by the government and nothing happens; in Mexico many gross human rights violations occur and there is no governmental responsibility, no punishment, and no rule of law. The most recent mass killings in Tlataya, Ayotzinapa and Apatzingan are clear examples of impunity and corruption. In addition, national media channels usually do not talk about gross human rights violations.

The most challenging obstacles for my work are corruption and impunity.  In Mexico, when a gross human rights violation is committed, the government usually knows what is going on but it does not tell the truth. Torture and disappearance are common practices in my country, but the government denies this practice.

Notre Dame has an excellent human rights program focused on practice. For human rights lawyers who want to develop skills in human rights practice, there is no better option. Classes are small and you are surrounded by lawyers from different cultures who advocate for human rights. This unique environment helps you to develop your skills. Moreover, at Notre Dame you are a unique part of a big family.  It has been a highly valuable experience learning from both professors and colleagues

For human rights lawyers, it is necessary to work with the best possible tools in order to protect human dignity. It is not enough just to know and practice domestic law. You need to work with international instruments, and feel comfortable when doing international litigation. The skills that I am acquiring at Notre Dame make me feel more confident and effective as a human rights practitioner. After finishing my LL.M. I will do extensive litigation on both the domestic and international level. For me, an LL.M. from Notre Dame also brings to mind the distinctive moments and often beautiful experiences shared with professors and classmates, people who I love and who will inspire me for a lifetime.